When we launched Floating Empire last June, we had a bit of a mishap getting her off of the trailer and into the water.  A bit too much pressure from a fork lift snapped one of the 2X6 stringers beneath the boat amidships.  There was plenty of other support, so we weren’t too upset about it.

But as we’ve sat here in the water, we began to notice that stringer subsiding a bit, and it became apparent that we needed to get a bit more support beneath it.  As it was, we felt we were a bit light, so to speak, in the floatation department.  The trouble is, it’s winter, and the river is iced part of the time.  Me swimming in freezing water to try to dive beneath the boat and install another barrel or make repairs just wasn’t going to happen.  Pulling the boat, putting her in the slings and taking her completely out of the water to make a repair, would be an expensive pain in the butt as well.  I was a bit stumped.

Going through my notes, I ran across something from years ago that they called a “Sea Cell” that is now referred to as Pneumatically Stabilized Platform (PSP) floatation.  This is basically an upside down, open container, the opening on the bottom, half filled with air.  The theory works like this:  The air provides floatation. 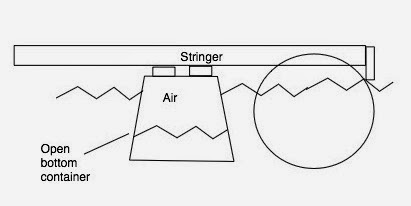 When wave action tries to lift the cell, the air acts like a vacuum, trying to lift the column of water in the bottom of the cell (at 8.45 pounds per gallon), making it virtually impossible to pull the thing out of the water.  Thinking on it, this seemed like a great idea.

We purchased four heavy duty 30 gallon bins, turned them upside down, and glued and zip tied two treated 2”X4”’s to each pair.  Once the glue had set, we ran a line from our floor hatches (we have 4) to the 2”X4”s, sank the rig, and then pulled it under our barrel floats and up snug against the stringers inboard of our existing floatation.  Then we ran an air hose down through the floor hatch and under the open lower edge of the cell and let air bubble up into the cell.

Voila!  Instant floatation.  The air pressure forced the cells and their 2X4’s up against the stringers, locking them in place and supplying additional support and floatation.  We added a pair of floats to Port where the damage was, and then a second one to Starboard to balance the lift.  This has worked so well, we’ll be adding an additional four of the cells fore and aft in a couple of weeks to further stabilize the boat.

I love it when Things work.

Hey check out Onboard Cooking and Life, Art, Water, our other damp blogs.
Posted by Mungo at 4:26 PM