I thought this would be an appropriate time to throw this up here:  Here's a partial list of the things we need for the new vessel.  Got any of this laying around?  We'd love to have em.

Our dear friend Robert has worked the math on the wheel structure and supplied us with a hypothetical drawing.  Paddlewheel math is really interesting.  Here's a version: 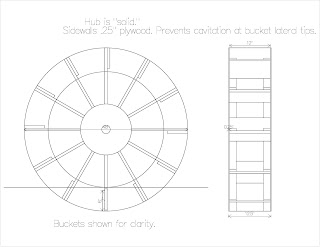 The basic calculation is this:  The size of the paddles is the wetted surface of the hull (excluding rudder surfaces) divided by the average rpm of the wheel, with the velocity at any given speed calculated as the number of times the circumference of the wheel will play out as distance. So a 10' wheel will travel 100' for every ten revolutions.

Also known as "sea cells". . . .I thought I would put on some notes on their use and operation since we've lived with them for a few months.  PSF floats are basically open ended containers, open side down, trapping air for floatation.

The Great advantage of the sea cells is the ability to top them off, flotation wise.  Here's the thing.  As water temperatures fall in winter, the air inside pontoons or barrel floats contracts.  In some cases, particularly with flexible barrels, the float kind of collapses.  You can lose upt to 10% of your flotation as the temperature drops.

Open bottomed cells can be easily topped off to maintain the same level of buoyancy, or air can be drawn out to make the cell sit lower in the water.   Here's some of the things we've learned using them, though:

1) There's a temptation to fill them all the way with air, and that's fine, but if you do so during cold water days, when the water warms, the air will bubble out as it expands, then when the water cools again, you'll have less air in them than when you started.  A buffer of water should be left at the bottom to keep the air level stable, even though it will contract with temperature.  This "plug" of water also helps keep the boat stable, as the cell will try to lift all the water with it when pushed upward by a wave.

2)  These things are not hydrodynamic.  Wave action, currents, boat motion, can cause air to be mined out of them, reducing your flotation.  Moving the vessel at any speed is right out.  While topping them off and keeping track of the air level isn't difficult, you do have to keep on top of said.

3)  All that being said, they do work, and work inexpensively.  There is also a great possible application for collapsible floats or docks as the units could potentially be nested and stacked when not in the water.

Our Indiegogo campaign continues, and we still can use your help.  If appreciate our projects and would like to show us a little love (and collect some cool swag) drop on over to :  Tesla's Revenge and check it out!

Just a quick update on our campaign to raise funds for Tesla's Revenge and on the upcoming build.

The campaign is live on Indegogo and we're starting to get in donations, which makes us happy.  If you'd like to participate and be part of this project (and get some cool swag), you can do so by going HERE.

Our friend Robert, who is, among other things, the owner of the fastest paddlewheel boat on earth (no kidding), has been kind enough to do all the engineering computations for the size and shape of the paddlewheel, which has given us some pleasant surprises about the complexity and weight of the thing (more on this later), and we're moving forward with the final design work.  We also will be generating working drawings and renderings as we move through the build.

So, it's a good week for boats.  We move forward.  More shortly.

New stuff at Life, Art, Water, check it out.

Live With Our Campaign!!!

And we're live with our Indegogo campaign for the new version of the shantyboat.  Check it out by clicking HERE.

We're really excited about this, and have some great arty perks for helping out.  Please go check out the campaign page.

This is gonna be cool.

Okay, this is exciting.  We're preparing to build a new, and improved version of our beloved paddlewheel shantyboat, Floating Empire.

For those of you not familiar, the Floating Empire was (and is) a great project:  An electrically driven, off-grid, livaboard paddlewheel shantyboat built with common handtools and out of salvaged and repurposed materials was an idea first conceived in the "Bypassed Technologies" group of Grindlebone Arts, and at once caught people's imaginations.  In a world of rising waters and skyrocketing living costs, the idea of a floating Steampunk tinyhome that could be built by anyone was a  popular idea.  After a year long bout of research and design, work on the boat started in March of 2014 and the boat finally splashed in Middle River off the Chesapeake Bay in early June of that year.
Over the course of the next three years, the vessel served as a living laboratory for tools, techniques, and life on the water.  Through this blog, the full range of vessel construction, ideas, revisions, repairs, product reviews, and experiences were chronologed for tens of thousands of viewers.  It has been, all in all, a great experiment, and a wonderful journey.

But we're not done yet.

The final phase of the project is to apply the lessons we've learned over the last three years of living full time on the water.  Tesla's Revenge will be a floating tinyhome, an off-grid, mobile, electrically driven paddlewheel  livaboard shantyboat, designed to be built of common, inexpensive materials with basic handtools by pretty much anyone.  It will be intended to serve as a safe and snug home for an individual or couple, a fine place to live as well as a vehicle for adventure, experiences, and art.  Every phase of construction and use will be detailed online, free for anyone to use, an open source of information and ideas.

On January 21, 2017 we'll be starting an indegogo fundraising campaign to help build the new boat, with some wonderful arts perks from Grindlebone Arts (source of the Center for Bypassed Technologies).  I'll put a link on here.  We're excited.
Posted by Mungo at 10:38 AM No comments:

For those of you keeping track, we racked off our cranberry cider into a series of (mostly used) flip cap bottles today, adding a bit of brown sugar to each to make some carbonation.
This is a particularly yummy batch and it's gonna be a REAL challenge to keep out of it long enough for it to finish fermentation and to age a bit.  My guess is, we won't.

More stuff over at Life, Art, Water, check it out.

So just giving you folks a heads up:  On Jan 21 we're going to be starting a crowdfund campaign through Indegogo for the new Shantyboat:  Tesla's Revenge.  Because we're going through Grindlebone Arts again, there will be some really, REALLY cool perks for being a part of it, so stop by and lend us a hand.

Hey, Kindle is doing a promo on my latest novel this weekend (well, Sunday and Monday  Jan 15-16) letting folks download it for free.  Go grab a copy.  Makes me look good.

As we gear up for the new boat design, I spent a bit of last night thinking about the successes and failures of our current shantyboat The Floating Empire.  Starting from the water up:


The barrels we used for flotation, were, on the whole, a great choice (save for their hydrodynamics).  It took nearly three years for any kind of growth to adhere to the polyethylene, and even now, there isn't a whole lot.  If I had it to do over again, I would orient the barrels so one of the bungs was on the bottom and leave it open so that the air could be topped off in cold weather, rather like we do with our open bottomed floatation additions.  I'd have given them a coat of bottom paint to keep ALL the growth off and probably tossed a piece of copper scrap inside the barrel to stop anything from using it as a residence.

The pipe and beam system we used to support the barrels has worked beautifully.  They reamain stable, solid, and in place.  The biggest drawback was in not having enough of them.  If I rebuilt the Empire today, I would use a double row on either side, which would give me enough surplus flotation for any foreseeable revisions to the structure or any likely buying frenzy of cast iron cookware.

When we built the thing, a lot of folks told us that the thin, stressed skin plywood floor wouldn't last.  Going on four years later (with the exception of a part on the bow that was damaged in the move) the floor remains as it was:  springy, kind of uneven, but still quite solid.  The biggest drawback has been the lack of insulation beneath the floor, which has made heating more of a challenge than it should have been.

The kingpost based structure has worked solidly and well.  The biggest limitation was using the kingposts for the frame of the forward doorway, which meant that nothing over 19 inches could get in the boat (we bought some GREAT chairs for the galley. . . .they're up on the patio at the marina now.  No way to get them in).  I've already done a bit on the failure of the material we used for the curtain walls here, but the membrane replacement has worked beautifully.
While I'm on the subject of the Membrane, it's one of the great success stories of this vessel.  Through four years now of storms, rain, snow, hail, beating sun, confused seagulls, and high winds, it has shown no sign of failing, not really any signs of wear.  Once we put the same material in place over the walls, all of our leakage problems vanished on the port and starboard sides.  I frankly had my doubts when we built the thing, but it was a cheap way to seal in the structure without adding a lot of weight.  Now it seems the only logical choice for the new vessel.

I mention these features of The Floating Empire because many of them will NOT be reappearing on the new boat, but I did want you to know that it was NOT because they didn't work. Its just our intended purpose for the new boat, which is wide ranging travel in only moderately protected waters, makes them inappropriate for Tesla's Revenge.  The barrel structure, though wonderful for a floating home or in very protected waters, simply has too much water resistance for us and too little freeboard; the king posts, while excellent in supporting the second level of the structure, are pretty superfluous in the single story of the new boat.  The membrane, though:  to seal in the new walls and roofline, why would we choose anything else?

So it's been ten days and we racked the must today, straining out the cranberries and dead yeast and adding two cups of brown sugar before returning to the fermentation bucket.
Of course, in the process of straining it off we had to try some, right?

These cider projects are really fun.  Recommend them highly for long, chilly winters.