Sorry we've been a bit remiss of late in posting, but we've been building a sailboat!

As we go into September and October, we go into some of the best sailing weather of the year here on the Middle River.  Not wanting to miss it, we decided to do something about it.  The decision to build us a Puddle Duck was also driven by the need of some kind of box tender for work on the outside of Floating Empire.  So off we go.

The Puddle Duck Racer (PDR) is an interesting craft.  Based loosely on the Bolger Brick and a few other designs, its become this fun and fanciful class of sailing dinghies worldwide.  Since the class is only defined by the bottom 10" or so of the hull, the variety and creativity of this little boat is amazing.  Check out pdracer.org for both the plans and some great ideas.

The vessel is a cheap, quick sailing scow, with a bit of rocker and a box like hull.  So, as usual, with limited funds and more time than sense, we tied into it.

We began by cutting the pieces from 3/8" exterior plywood, laying out the very limited lofting required to make the rocker of the bottom.  Piece of cake.  Knowing A)  the quality of wood around here and B) my penchant for haphazard carpentry, we decided to cut the chine logs in one piece from two 2"X8"s.  This not only would save a bit of time and save me the headache of trying to bend the knothole ridden matchsticks they sell in most of the lumber stores around here to the rocker curve, it would also give us a nice rail down either side for seating.  We finished framing in the two sides, then connected them with a couple of 2"X3"s, the one at the bow cut in a bevel to match the angle of the bow plate to the bottom.  This went far better than I'd expected.  Just snapped a line on the board, set the angle on a circular saw, and I managed to hit it pretty much right the first time.


We attached the bow and stern plates, using a bit of gorilla glue, then recruited some of our slip mates for the attaching of the bottom.

The bottom of this thing is just a single sheet of plywood.  We gooed the bottom of the chines with PL Premium, started at one end, and screwed the sheet down in 6" increments with epoxy coated decking screws.  It all went rather well, actually.

Now we get to the tricky part.  There was no money laying around for fiberglass and epoxy, and I hate dealing with the toxic stuff anyway, so how to seal this?  Casting about, I ran across an article from a 1950's Popular Science describing how to waterproof an older wooden boat using glue and canvas.  We decided to give that a shot.

We filled all the cracks with a mixture of Titebond III and sawdust, painted on a pretty thick layer of the Titebond III on the cracks, and then did a "dutch mend" to stick down a strip of muslin cloth on the seams, then saturated the cloth with glue as well.

Once that dried, we did a coat of primer on the whole hull, then two coats of a good exterior latex house paint.  The interior gets caulked and then gets the same treatment.

The Zebra mussels have been godawful here this year, so we figured antifouling paint was a must, and the guys at the marina were nice enough to give us a partially used container to play with.  We taped off the possible waterline and gave it two good coats of an ablative antifouling paint.


We also hit the rudder and leeboard with the same stuff.

We gave the boat a pretty deep rudder and leeboard.  I think a lot of small vessels are somewhat wanting in the rudder department, which makes them kinda uncontrollable in light air.  We gave both the blades a bit of a shape with an angle grinder sanding attachment to reduce drag a bit.

A week or so ago, one of the slip holders threw out a damaged mainsail from their 24, which I liberated from the dumpster.  We cut the sail, conveniently already equipped with grommets and the like, down into a top sprit 50 square feet or so, using Tear Mender to lap and seal the cut edges. 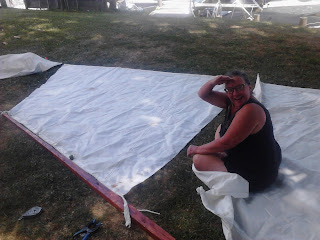 Part of the design is to include floatation, which is typically expressed as sealed air boxes either on the sides or bow and stern.


And, of course, we are artists, remember?


So today it's raining.  Today we'll get the sail and sprit together and make ready.  Tomorrow, in good weather, we'll splash for the first time.  Photos and maybe video shortly.

(PS minor update:  Well, we know it'll hold water.  From the rain last night and this morning, it was full of about ten inches of it.  That's good, right?)

(Update to the update, just had email from Shorty from PDRacer.org.  We now have a hull number.  It's 956, if you're interested. Huzzah!)
Posted by Mungo at 11:41 AM