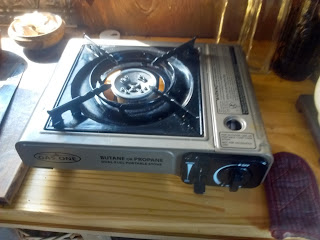 So I thought, having lived with this thing a bit, that we might do an update on our assessment of this little stove.

First of all, we have moved from butane to propane and back a couple of times, as our stocks of the above gasses were used up.  Despite propane being a bit less energy dense than the butane, we've seen no perceptible difference in the heat, including during sustained high heat uses like roasting coffeebeans.  As the mornings have gotten chillier, we've seen none of the reluctance in the propane that we see in the butane cylinders below 50 degrees F, which is a rather nice plus in the morning coffee and tea department.

We are getting slightly more use at slightly less cost from the propane as opposed to the butane. The difference winds up being about a buck per two cylinders of propane (16 oz).  Such difference would be more than wiped out if we were having them shipped as the propane bottles are appreciably heavier.

We have yet to adapt the system to a larger propane bottle that could be refilled, though that is obviously possible.  We may be trying that in a month or so and will give you a full report.

Changing the system from propane to butane is simple and not at all onerous.  The thermocouple safety device took a bit to get used to, but once we did, it proved no problem.

In general, we're pleased with the little stove.  The ability to use multiple fuel sources, coupled with our woodstove, gives us a lot of options and it would be a boon to long distance cruisers.  Stay tuned, more on this later.

The fall has hit here in full force and we're now in the grips of a lovely Indian Summer her on the river, with cool nights and warm days and the trees changing color.  We're close to decanting another batch of hard cider.  It's gonna be a lovely fall.

New stuff over at Life, Art, Water.  Check it out.