Prepping for the Storm

So, as we go into two days of blizzard (and, no, I don't mean a Skyrim festival) here's some of the things we've done to prep. 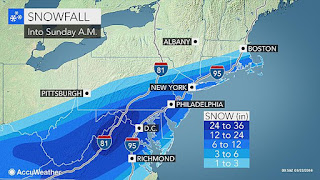 As we're likely to be stuck here on board for at least two days:

Tied down all the coolers on the dock and added an additional spring line to the dock, just in case.

Put us on shore power so that our batteries can be as charged as they're gonna get.  That way if we lose power, I'll have electricity even if the solar panels are covered and we're heavily overcast.

Showered, cleaned, did laundry, did the dishes.  In general tried to do anything that would be a pain in the butt or dangerous to do in a snowstorm.

Charged up the computers, tablets, phones, and the cat.  I really shouldn't have tried that.  It mostly irritated him.

Did I mention wine?

The snow is starting to fall.  We're looking at two feet of the stuff, along with winds that could hit 50mph.

Such is life aboard.  Wish us luck.