Aboard the EV Tesla's Revenge

I'm sitting here in the galley of Tesla's Revenge, sun streaming in the open hatchway.  The coming weeks are going to include a massive amount of work on the new vessel that we hope to share with you, including:

All this mess should take us about three months (he said, being wildly overly optimistic) and then we should get to take you folks along on some travels, first around the Chesapeake, then into the Erie Canal system and the Great Lakes and Canada.

This is gonna be a metric craptonne of work (that is, of course, the technical term) but we love making things.

Stay tuned.  This is just beginning.

Here's a shot of The Floating Empire, making her voyage to her new home, witnesses in attendance.

I'm sentimental about stuff in my life, and this is no exception.  The Empire has been our home for going on four years.  We built every inch of her, sweat and blood literally in every screw driven, every board cut.  I'm so very happy not to have had to break our little ship, and delighted that she's in the hands of someone who will give her the care she needs.  We're off to new adventures with Tesla's Revenge, new creations, new places, but still. . . .

I shall miss her.

Many more photos over at Life, Art, Water of her departure.

And now, our new saga begins.

Moving is always such a treat.

Yes, that was sarcasm in case you missed it.

Be it house to house or boat to boat, moving is a pain in the butt. You get to wonder such imponderables as “where did all this stuff COME from?” and “what is this and why did we save it?” among other favorites. Yep, it's a joy.

For those of you who have followed this blog you know that we're leaving our beloved barrel shantyboat Floating Empire, and moving aboard a new vessel, now dubbed Tesla's Revenge, an electrically driven solar boat with which we want to do some traveling. We'd been afraid that we would have to demolish our shantyboat, but, happily, a new owner has emerged to give Empire the TLC she needs and she'll be off on a series of new adventures.

But that leaves us downsizing yet again. I kid my wife that we're going to keep doing this until we can fit our possessions into a single briefcase. She says it'll just make it easier when we go to Mars.

The new vessel is coming along. . . .clumsily . . . as we're having to continue rebuilding and refitting the boat while we're living on her. Tesla's Revenge is a former Cal 2-29. We've shifted over the Empire's battery bank (all eight o them), and will be pulling the mast (the mast supports have some issues), building a pilot house over the cockpit, and equipping her with a 5KW motor and 1000 watts of solar panels.

Then the real fun begins, probably about midsummer.

As we reflect on Floating Empire and our last three years on the water, its amazing to think what a wonderful choice moving aboard proved to be: the adventures had, friends made, and all surrounded by the beauty and grace of the water. We wouldn't have had it any other way.

On to the next adventure.

We have found a new and happy home for our beloved Floating Empire, (allowing us to complete work on Tesla's Revenge with a clear maritime conscience. )  Stay tuned. 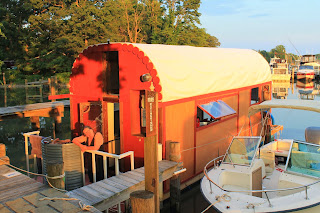 We'll it's official.  Tesla's Revenge is in the water.  Now the real work starts.

Many more pictures of the splash and christening over at Life, Art, Water.  Check em out!

So the final, simple act in putting our new head together is to attach the seat.  We've used in the past the "Luggable Loo", a snap on "emergency" seat cover designed specifically to work with a 5 gallon bucket.  In order to make things easy, we cut off the top of one bucket to which to attach the seat, leaving enough length for it to nest in the full bucket of the receptacle beneath.
So you only need to drop in and line the full bucket, dropping in enough biomass to absorb the liquid (We continue to successfully use wood stove pellets.  They're compact and tidy), pop on the lid, and then put in the cut off bucket top and lid.

This is such a simple system, I'm amazed more people don't use them.  The blackwater ones reek, and they're a nightmare to repair. 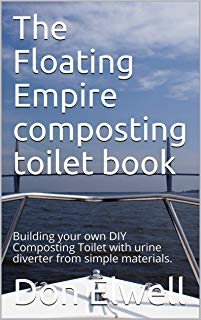