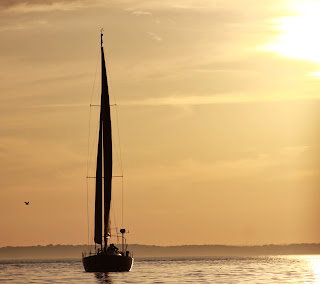 Hi folks, just a quick note:  We've taken the opportunity to get the hell out of Dodge and go sailing for a few days, which has delayed our posting for a bit.  At present, we're at anchor at Worton Creek (with some VERY limited wifi signal), and are planning on heading up to Still Pond or the Sassafras River in a day or so.  We'll be back in a few with LOTS of new pictures, some new ideas, and more stuff for you, so please stay tuned.

Got to use our improvised cockpit shower for the first time on the hook today, and it was delightful.  Al Fresco bathing at it's finest.  No, you're not getting pictures of that.  Trust me.

So we're spending the day just kicking back and relaxing.  There's something wonderful about anchoring in a secluded little nook and just chilling out.  We got lots of opportunities to try out Gail's new 300mm lens, our new monocular, and some new navigational software, which we'll be dutifully reporting on upon our return.  For now, it's five o'clock somewhere.  Enjoy your weekend.

We finally got away from the dock after dealing with some engine issues and spent last night out on the hook for the first time this year, which was wonderful.  There's something amazingly peaceful about anchoring in a secluded cove and just kicking back, reading, napping, or daydreaming.  We've both missed it.  This was our shakedown cruise to make sure we were ready for a longer session on the water.  Boy are we ready.
One of the challenges of living aboard, particularly for those of us cruising or living on the hook, is just keeping clean.  Too many days at sea without some semblance of a shower can leave the cabin and bedding a little. . .well. . .ripe.  Add to that the vaguely corrosive effect of salt water on the skin, and you have a formula for some really funky crewmembers.

A lot of vessels, even rather small ones, have showers, generally of the "wet head" variety, but, to be honest, a lot do not.  Constellation is one in the "do not" category. While at dock, we can always use the opulent showers at the marina, but frankly, with the whole Covid-19 thing going on, we're trying to keep as far from public spaces as possible.  Besides, with the return of warmer weather and Maryland's release of boaters from quarantine rules (mostly) we're planning on being away from dock a lot, so what to do?

Our solution was to create our own privacy stall in the cockpit for bathing, and thus far, it's working pretty well.  We used a couple of long bungee cords, threaded through some inexpensive polyester shower curtains, to enclose part of the bimini.
In looking for a shower source,  you have several choices.  You can, of course, go with one of the ubiquitous hanging solar bag showers.  They do work, but they're heavy, and most bimini's won't gracefully take that kind of load.  We opted to go for a small electrically driven unit.  There are several of these on the market.  They're inexpensive and work pretty well.  Some are USB rechargeable units, but we opted for one that plugged into the 12V outlet we have in the cockpit.

We use a 5 gallon bucket for water, either using tap water or river water, and adding about a half gallon of boiling water to heat it up.  You could, of course, solar heat the water or just take a cold water shower (not my fave).  The full bucket gives the both of us a decent shower without doing much scrimping, and it sure feels good after a few days on the water, and the cat no longer objects to the smell.

Total cost of the setup was probably about $60 including the water pump rig (do a search for "camping showers" and you'll find lots of options), and a couple of discount shore shower curtains.  On a side note, I couldn't tell what the bizarre pattern on the ones we got was from the package.  Once we opened them, it turned out they were--ready?--Constellations!  Hows that for kismet?

Next up:  Laundry!  Stay tuned.

Be safe out there.

Some Minor Notes on the New Composting Toilet Design

Having lived for a bit with the new version of our DIY Composting toilet, I thought I'd share a few things that we've found.

First of all: Overall, this is the best one of these we've built.  It's compact, easy to deal with, far easier to dump than earlier versions, and the urine separator works VERY well, taking a minimum of fiddling about with to make drain properly.

I had been afraid that the notch we put in the holding bucket would either leak or weaken the container too much, but that hasn't  been the case.  The Bucket pulls out of it's base just fine, is simple to dump, and easy to return to service.

The slightly lower exit point for the urine tube, combined with the right angle fitting means the tube is far less likely to kink and that the flow to the diverter container is a relatively straight shot, with no urine being left in either the diverter itself or the tube.  This means no smell and no discoloration, which is great.

As with our previous design, we're finding that we are emptying the urine container every day or every other day and the dry solids every week to ten days.   If this seems a bit shorter than usual, the current quarantine means we're spending a LOT more time together on the boat and very little elsewhere, so all our . . .um. . .business gets done on the boat and almost none in stores or in the Marina bathrooms.

Some minor, mostly easily fixable, drawbacks:  The notch in the containment bucket is a bit sharp, which means if we're using a liner, it's prone to being punctured or torn by the plastic as it's put in place.  A bit of sandpaper should fix this.

I still need to find some better sealant for the threads of the right angle fitting on the diverter.  It drips a bit into the dry solids, which I'd rather it didn't.  Will be trying some 4200 later this week, which I suspect will clear it up.

The snap on toilet seats all seem to have the same problem:  The pins that act as hinge for the seat cover are too short, and the cover often disconnects from them.  I really wish Reliance or one of the other companies would fix this.  As it is, it's a minor annoyance.

The main thing I think I like about this version is that. . .well. . .it just LOOKS nice, aside from working well.  It looks like it belongs there, which pleases us.  Unlike some of our other versions, this one also gives you an option as to where to place the urine container, which i can see being a plus.

All in all, this one is a keeper.  The build will take you all of about half an hour and cost well less than $50 US.   You can find the instructions on this new build HERE, along with links to our original build and to the booklet we've published on Amazon about making these things.