We were out on a friend's boat last night and stopped in at one of the waterfront pubs for a drink.

Not bad, hunh?  Just wanted to pass that along.

So, we're about halfway through the revisions to the boat, and I've got to say, it's a much more pleasant and productive space.  We're really enjoying the more open floorplan, the settee is a much more comfortable place in which to sit and work, and we'll have more storage when we're done--and storage we can get to without crawling like commandos under the counters.

Next up, dealing with this:

Not that we have a lot of issues with the Galley.  It has served us well, but we laid out the thing based on the kitchen in our old apartment, and, frankly, we don't have the same work flow patterns here on the boat as we did there.  That's what living with a space can teach you.  So the sink is going to the far left and we'll get another two feet or so of counterspace. 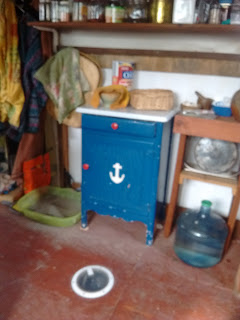 But we did get a great find the other day.  A furniture refurbishing store was tossing out this great little sideboard stand.  Enameled steel top (like our breakfront, also 1930's) nautical theme, et al.  It will fit perfectly with the new galley and sink.  Don't pass up these things when you see them by the side of the road.  They can be great plusses for your space.

Hey, if you've got a kindle reader, there's a giveaway of downloads for my Novella "In the Shade" (caution, some adult content) on Kindle this weekend (April 22-24 2016).  Go grab yrself a copy.

Or:  The great woodstove experiment

How this came about:  Since we began the Floating Empire project, one of our main goals has been to take the whole thing as far off grid as possible, to use little or no fossil fuels and to operate with as much self sufficiency as possible.  In that regard, we produce the bulk of our power from solar, process our own water, and, in general, try to live as lightly on the planet as we can.

But heating and cooking was one area where we were less than green.  Admittedly, using our kerosene stove and heater used very little fuel, but it's still a fossil fuel.  We looked at a number of other options, but kept coming back to wood and charcoal as a greener option for heating and cooking.  Our original design had an open hearth where we could actually have a small fire, but we never really used it.

But finally the expense, smell, and inconvenience of kerosene kind of got to us.  We began to re-address solid fuel stoves as an option.  There is quite a bit of deadfall hereabouts, and a lot of our Marina neighbors are in construction, so there would probably be a ready source of small, dry wood.

Here's the problem:  Woodstoves, particularly for vessels, are expensive, and each has their own eccentricities.  Prices ranged from around $260 for the Fatsco stoves to well over a thousand for other makes.  We were leery of making the investment if we didn't know if we could live with wood as a cooksource.

So we, like all good Americans, went directly to the internet and found the cheapest possible wood stoves.  These are barrel stoves intended for tents, and, on one level, Floating Empire is just a big tent.  We found a Chinese (of course) version for less than $100 which included a stainless steel water jacket, so we went for it.  If we liked it, we could always upgrade.  If not, we'd not be out much.

The rather ubiquitous one we found is marketed in the US by TMS, and generally advertised as :  TMS® Portable Military Camping Wood Cooking Ice Fishing Cook Stove Tent Heater With Water Kettle Teapot.

Okay, lets get real.  This thing is a long way from military grade.  It's a cheap stove made from sheet metal, apparently recycled sheet metal, with iffy welds, bad paint, and meh fitting parts.  The price, was, however, right, so we gave it a whack.


Okay, first the bad news.  Everything you've read about the fit and the paint on this thing is true.  The stove comes with a glossy coat of what appears to be automotive paint.

We had been warned of this by numerous reviews, so if you get one of these do NOT do your first couple of burns inside unless you like burning paint fumes and smoke (If you DO like breathing paint fumes, I recommend repeatedly telling yourself that the bunnies are not real).  As it was, one three-hour burn took enough of the paint off that it was possible to sand the rest off in only about twenty minutes.

The second thing is the construction:  While the machine welds along the cylinder of the stove body are precise, anything done by hand is sloppy.  One reviewer commented that they looked like they were done by a bored teenager on some factory floor, and that's not too far from the truth.  Some of the design ideas are just plain odd.  The door, in particular, is kind of odd.  There is no provision for a gasket, and the catch is, well, puzzling.

The catch is a tube, welded to a screw, through which a piece of bent rod stock slides.  Why?  It's almost impossible to engage when the stove is hot.  Like most folks, I replaced it with a piece of flat steel, which works pretty well.

There is, of course, some good news:  The air control vents are spring loaded and work well, and, though it isn't mentioned, they are on both the front and back of the stove, giving you a fair amount of control.  There is also an ash dump in the back with a sliding hatch, which also isn't mentioned.  The stove pipe is HEAVY.  Actually, I think it's probably automotive exhaust pipe, but it does the job.  The rack with the two circulation tubes fit well on our stove and do their job.

Then there's the water jacket:

Unlike the stove, it's a precisely shaped and welded piece of stainless steel with a metal valve assembly.  Probably cost more to make than the stove, but heats water quickly (it holds about 2.5 L), and is gonna be handy.

In order to create a space for the stove, we extended the stepped hearth we had built for the kero stove and lined the whole thing with concrete board, then with tile to handle the heat.

We've used the stove a few days now, cooking on it last night...okay, we boiled water... and using it for heat (we've had a bit of a cold snap lately), and it seems to work fairly well.  We'll be needing to extend the chimney (air from a north wind compresses air against the front of the boat and backdrafts the stove a bit)  and doing some prettification on the stove platform, but thus far, so good.  We'll be giving you an update as we experiment with this little tin can.

More stuff at Life, Art, Water, and over at Wild Shore Press.  Give em a look.

as in "Boy Am I Tired of This Wind".   We've had now five straight days of insane winds, some gusting to 50 knots.  One of the effects of this if the winds are from the North is to blow the water out of Middle River and Hopkin's Creek, which, in turn, makes for some obscenely low tides.  QED:


The problem is, this ISN'T low tide, it's HIGH TIDE.  At present, we have only about a foot of water under the floatation.  This could be far too interesting a day.

oh, PS, the revised edition of my "The Ganymeade Protocol" is now available on Kindle.  Especially if you have Kindle Unlimited or Prime, go grab a copy and tell me what you think.

We spent a sleepless night last night, getting knocked around by 25+ MPH winds.  This wind nonsense has been going on in the Baltimore area for two days or more.....it all kinda blurs.  The sudden movements of the boat to gusts, the sudden stop at the end of the mooring lines, the sound of the waves against the hull, all of them are unaccustomed sensations and conspire to make an unsettled evening and a grouchy morning.

Even our beloved little Puddle Duck Racer, "Dharma Duck" took a bit of damage from being beat around.  All in all, not a great evening.

But one of the wonders--as well as the price you pay--of living aboard is living much, much closer to nature than most of our contemporaries.  The wind, the sun, the temperature of the water. . . .you feel all of these acutely. You live with them every day of your life.  They become part of you.

I'm more than willing to make that trade.