Clothing storage is a bit of an issue on vessels.  Mercifully, you tend to need fewer clothes on a vessel, especially in good weather, but still. . . .The problem isn't that there isn't room, though that's often at a premium.  The problem is that often that room consists of oddly shaped, not terribly easily accessed cubbies and storage lockers.  The effect is that your clothes get stored in multiple layers in containers and spaces often appreciably deeper than traditional drawers (and I'm bad enough with those) and after your third venture to the bottom of said clothing stack, what you have is not a stack of folded clothes but a bin of random wadded clothing.

There are a couple of solutions we all tend toward, of course.  Most livaboards I know keep out of season clothing off the vessel, stored in a locker or in their cars, just to reduce the sheer amount of cloth through which one must wade.  There are hanger extenders and racks and hooks and all manner of storage options to help extend your usable space.

Most of my clothes sit in two plastic bins up in the sleeping loft.   The bins are fine, they keep the stuff contained and dust and moisture free, but as cited earlier, they tend rather to become bins of random clothing rather rapidly.

It was in casting about for some kind of solution that I remembered this: 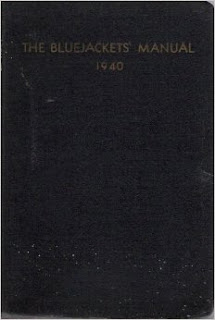 My dad's WWII copy of the redoubtable Bluejackets' Manual, the instruction book given to every American Navy Sailor since 1904.  It contains detailed information on ranks, command, procedures, and a photo layout of how to roll your clothes for stowage in a duffel bag.

I hit YouTube and found a number of videos on how to "roll a shirt", how to "roll pants" and the like. Once I tried it, this simple expedient made things much better.  My multitude of black T-shirts (I worked in theatre for ages, remember?) became a neat stack of rolls that stayed stacked, even when you had to move them around to get to things.  Things were less wrinkled, and more to the point, I could actually find the things I wanted.

Sometimes old ways are the best ways.  Hey, if you try this, leave us a comment on how it worked.