Well, since it's raining (again), I thought I'd take the opportunity to include some of the design considerations for The Floating Empire and how we reached them.  I did get some things done today, picking out and remaining lumber for the raft hull as well as the 10' pipe sections at our nearby big box lumber store....only to tell them to kindly hold them for me til tomorrow as it had started pouring outside (handling a 16' 2" X 8" is enough of a challenge in GOOD weather).  So with the stuff safely parked in the pick up section, I thought I'd wander around some of the ideas we're exploring with this project:

As I said in our intro (Beginnings....) , with rising sea levels a great deal of the world is likely rather quickly to go from merely low laying to uninhabitable, at least in the sense of conventional dwelling.  Low ground becomes marsh which can quickly become swamp, displacing the residents into areas that may not be particularly happy to see them.

Then there is the matter of the growing gap between the ultra rich and everyone else, making our "money extraction society" less and less livable.  Finding a way to unplug, to become more independent and self sufficient, is a way of preserving both autonomy and sanity.

And speaking purely personally, as a working artist entering my 6th decade, I had no real interest spending my remaining years saying "would you like fries with that?" or welcoming people to WalMart when I could be creating.  Nuff said.

So here are the basics that we considered:

1)  The vessel must be simple, of shallow draft, and easily constructed.

2) It must utilize large amounts of discarded or repurposed materials, and ALL of the materials used must be readily available.

3)  It must be of quick and inexpensive construction.

4)  It must get it's power from sustainable sources, including things like cooking, heating water, and propulsion.

5)  It must be able to be configured to meet individual needs.

After a degree of casting about, we decided the simplest, most easily constructed option would be to make a barrel barge utilizing recycled Poly 55 gallon drums.  I, of course, had a huge number of people (most of whom had no apparent experience with the things.) tell me that they would sink, collapse, explode, mutate into giant, genital eating Iguanas, etc etc etc.  But I grew up in Alabama, and on the Redneck Riviera of the NW Florida coast, and these things were at one time ubiquitous.  Even now, along the far too oft flooded Danube River around Belgrade, whole communities of Splovovi are springing up, floating on disused German chemical barrels and old Soviet era Iron (Here see: http://makezine.com/magazine/make-12/hands-on-floating-city/) 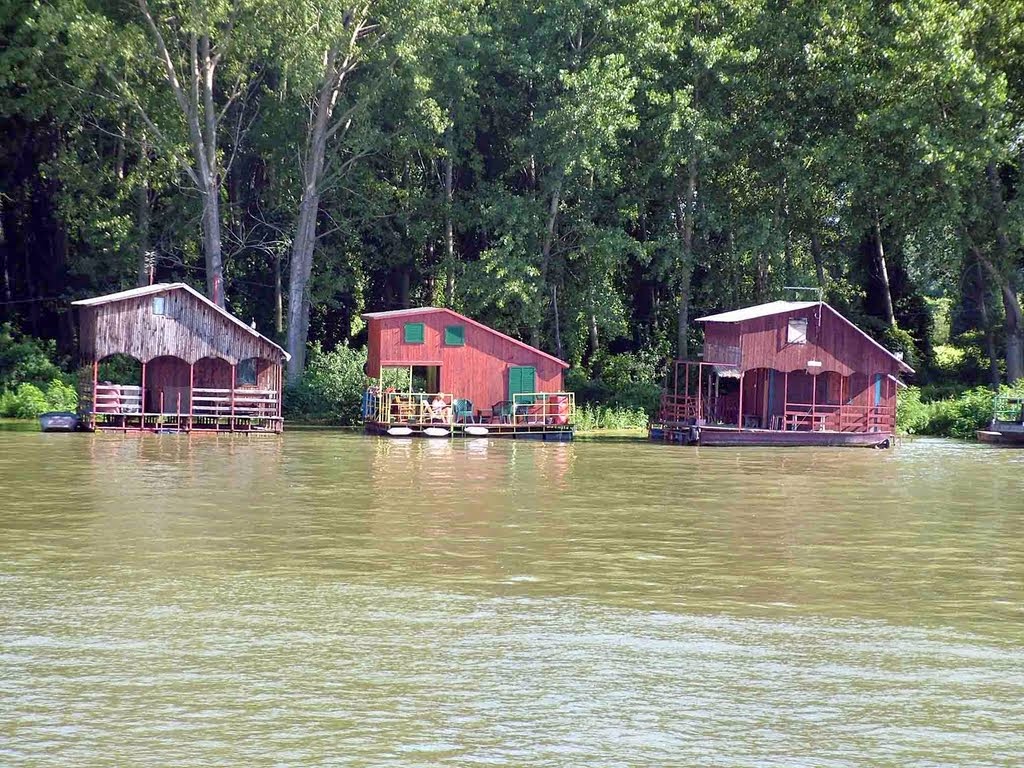 When we learned that the Rolling Barge company (http://rollingbarge.com/) was marketing Coast Guard approved, licensed vessels based on these things, It decided us.  The food grade polyethelene barrels can not, by law, be reused for their original purpose, and are either recycled or sold as rain barrels.  We managed to buy a mess of them in good condition for $10 each.

For the float structure there are a number of designs and plans available on the web.  One of the more interesting we ran across was one used by the Moomers (http://boat.moomers.org/BoatWiki.html) on their Illinois raft trip.  The structure used galvanized pipe to corral the barrels, thereby eliminating a whole lot of carpentry.  We decided to give that a shot: 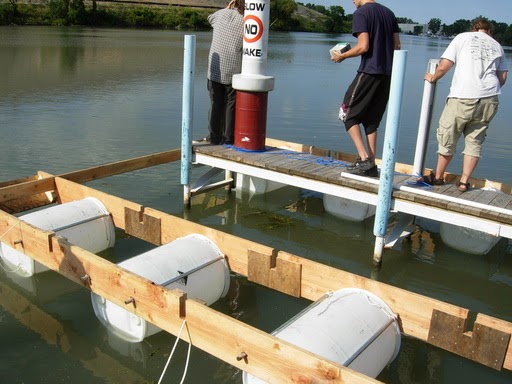 From the Moomer's website, barrels bound to pipe cross members.

Now came the matter of propulsion.  Yes, I know, we could just get a used outboard, but we wanted to avoid the use of fossil fuels entirely if we could.  Besides, where's the romance? We began to look into the humble paddlewheel.

Why paddlewheel?  A number of reasons.  First of all, the paddlewheel is very nearly unique in its ability to avoid being fouled by weeds, trash, cables, rocks, small and wayward swimming children, and other detritus in shallow water.  This is because, unlike most other forms of propulsion, the paddlewheel does't have to be below the level of the hull it's pushing in order to work properly.  Its "buckets" (the blades of the paddle) are all that has be be submerged as they turn in order for the thing to work.  They also are madly efficient at low speeds, transferring as much as 90% of their energy into pushing the water.  They also lend themselves to being driven by low speed power sources.  As to that, The Center for Bypassed Technologies has files on a bunch of stuff, including steam, hit or miss engines, and the like, but none of those involve off the shelf-readily available assets.

So we were left with electrical, either with solar panels or with a large primary cell "burning" scrap aluminum in a salt water electrolyte.  More on this later.

Now as to the structure.

Floatation (as in buoyancy) is an issue of weight vs displacement.  If an enclosed hull of any kind displaces, say, 100 lbs of water, then the hull will hold 100 lbs, (including it's own weight) before sinking.  Each of our floats will displace about 450 lbs of water, but we didn't want to tax them to more than half of their capacity.  Practically speaking, that gave us about 3800 lbs to play with, including the weight of the barrels (22 lbs apiece) and the frame holding them (about 600 lbs.).  Things had to be light, and again, easily and cheaply constructed.  For this we turned to several resources.  We took from the tiny house movement a lot of their ideas about kitchen layout and the use of sleeping lofts and shared spaces  (here see tinyhouseblog.com and others)

For some of the construction techniques we turned to the inspiring works of the ever hyperactive Derek "Deek" Diedricksen at relaxshacks.com.  Deek wrote the book .....literally....on unconventional construction and construction from discarded and repurposed materials.  His "Humble Homes, Simple Shacks, Cozy Cottages, Ramshackle Retreats, Funky Forts" is full of ideas and inspirations, and i recommend it highly.  Check out his Youtube channel, as well has his work on Tiny Yellow House on the MAKE magazine channels.

IN the interests of trying to keep the roof light, we delved into some of the Center's files on historic structures and came up with the classic Gypsy wagon, the Bowtop Vardo.

These graceful canvas roofs are incredibly strong, encompass a great deal of space, and are very lightweight....besides the form is aesthetically pleasing, don't you think? 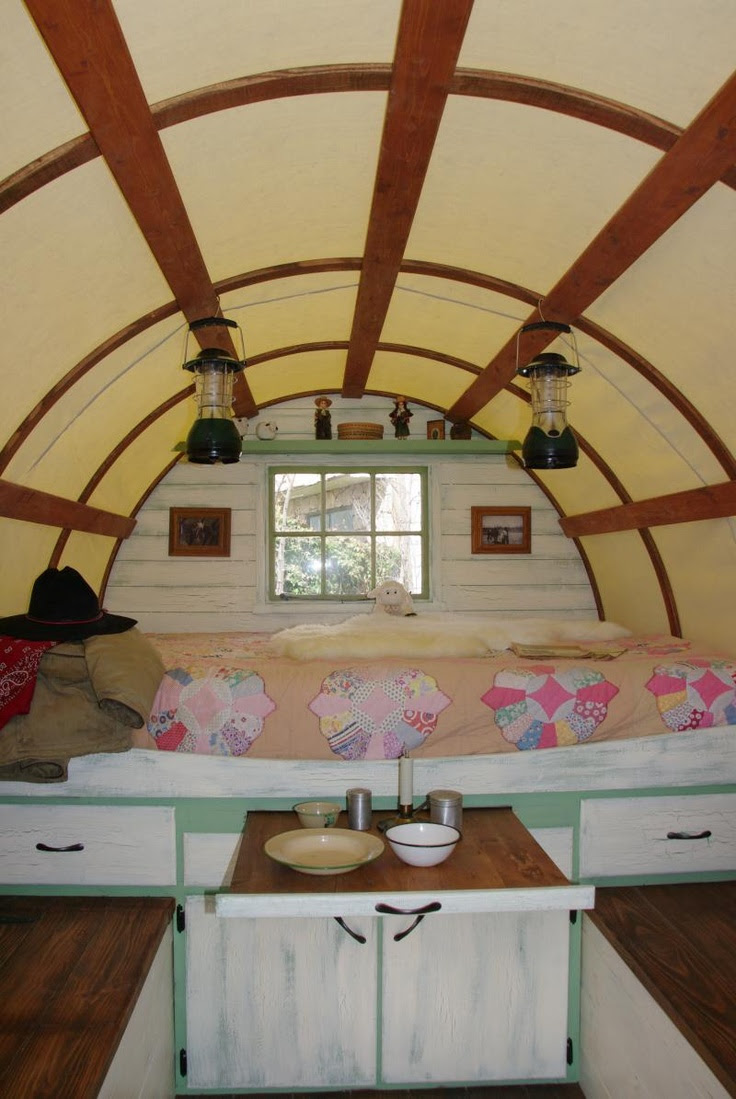 Instead of the traditional painted canvas, we opted for a modern cast-off equivalent:  The incredibly tough and UV resistant advertising covers put on billboards.  Billboard tarp is cheap, weatherproof, and easy to work with.  In fact, we were able to get hold of 20 mil material originally intended to roof a sports stadium for a relative pittance (check out billboardtarps.com and a few other sites).

Anyway, there in a nutshell are some of the concepts and ideas that influenced this design.  We will also be incorporating a number of other ideas, including an 18th century hearth for cooking, the use of wood gasifier burners, composting toilet (of course), and a bunch of other bits of occasionally archaic extreme cleverness.  Stay tuned.